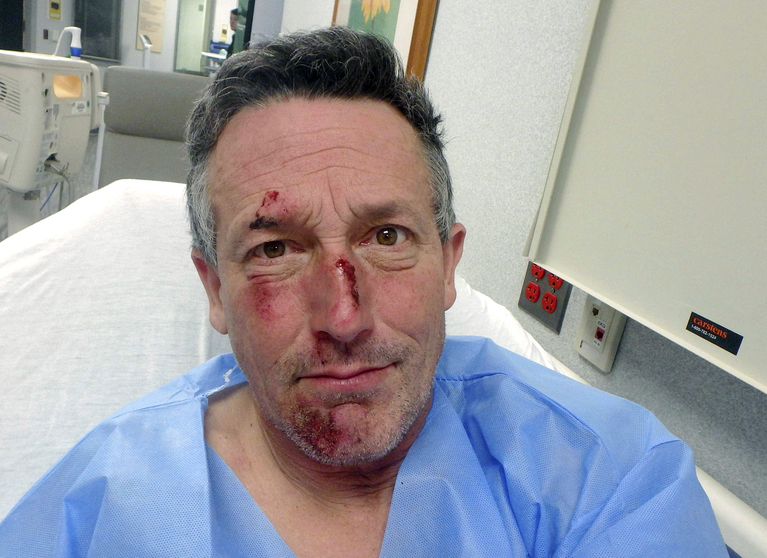 One Portsmouth NH man started the year off on a bad foot when he was arrested by police after being held at gun point by a legally armed Uber driver at around 5:45 p.m. on Monday evening.

In the final few hours of 2018, Fifty-year-old Aaron Marconi, on drugs at the time, drove his car into several parked cars, a Dunkin Donuts sign, and finally a sandwich shop.

According to witnesses, Marconi then attempted to flee the scene of destruction, but a citizen moved his vehicle to block in Marconi’s in order to prevent him from endangering anyone further or causing more damage.

Soon another citizen, this one an armed Uber drive moved keep Marconi from running away.

The second Good Samaritan seeing this aggressive action and hearing this threat, warned the first man and instructed him to retreat.

The second man then challenged the suspect with his firearm while issuing commands to stop.”

The armed citizen held Marconi in place until police arrived to take over the scene. Officers reportedly first seized the weapon, but later determined the pistol was being carried legally.

While police said they do not recommend that civilians take the risks the Good Samaritans did, they said their actions were legally justified.

Marconi was charged with driving while intoxicated, criminal threatening, conduct after an accident, and felony possession of Heroine.

He was released on personal recognizance bail after being hospitalized for an unknown reason.

Portsmouth Police say there may be more victims out there who might have found damage to their vehicles the next morning and encourages anyone who has questions or concerns to contact Officer Charlie Raizes at 603-610-7534.

Click here for a free eBook on Concealed Carry Law, Permits, and Community.

What do you think of the brave driver’s response to the situation? How would you have done it differently? Leave us a comment and let us know below.

“It’s Too Dangerous Out Here”